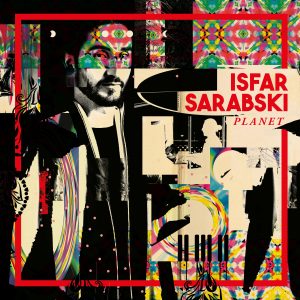 Let’s imagine the entry into Isfar Sarabski’s debut album “Planet” as scenic, like an enthusiastic and dramatic concert evening. The 31-year-old pianist, composer and arranger has earned enough laurels live in the last decade to be able to effortlessly fill theaters of considerable sizes between his Azerbaijani hometown of Baku, Berlin, New York and Los Angeles. The hall light goes out, a spot illuminates the grand piano, on which Sarabski initially leads into the action with a meditative primer on the edge of the stage.

He called the entry “Deja Vu” , but the memory illusion doesn’t last long. 40 seconds later he pauses for a moment before starting a highly demanding pulse motif. The curtain opens to reveal his two trio colleagues Mark Guiliana on drums and Alan Hampton on double bass. The three swing so edifyingly that the feet cannot possibly hold still. Just at the moment of the emotional and cognitive comprehension of this music, another curtain falls in a flash and not only allows a set of strings to be seen, which warmly multidimensionals the rhythmic and harmonic goings-on. The perceptual panorama is again suddenly expanded so that everything suddenly appears possible. Obviously three music lovers are at work here, supported by string instruments, playing a kind of chamber music jazz. Its complex metric, however, by no means serves an intellectual test of strength as an end in itself.

The fact that this music stimulates the imagination so admirably that it can be easily imagined in a concert setting, even though you are “only” listening to a studio recording, speaks for its immense vitality. Its source is Isfar Sarabski himself, as his vita clearly shows. During his scholarship at Berklee College of Music in Boston, he impressed fellow students and teachers alike with his curious and open-minded meander between jazz impressionism, the folklore tradition of his homeland and the exploration of electronic soundscapes. The track that Sarabski has been following for over two decades was laid in his childhood. His mother is a violin teacher, his father a great music connoisseur who, in addition to jazz, rock, soul and funk, also appreciates Bach, Brahms and Beethoven. And his great-grandfather Huseyngulu Sarabski was revered in the Orient as a music pioneer, opera singer, musician, actor and playwright.

Music is unquestionably an important part of Isfar Sarabski’s genes. “My father’s vinyl records were literally my toys,” he recalls. “I was fascinated by the mechanics of the turntable, by the large black discs, and of course by the world of tones, harmonies and rhythms that were revealed in them. I remember exactly the feelings that my first perception of Dizzy Gillespie records, or recordings of the works of Bach and Chopin, triggered in me. How could it be that music could create images in my head? I had to find out. ”

Thought and done. The first pianistic attempts at a simple Casio keyboard at the age of four were followed by own piano, admission to a music school in Baku, learning the traditional Mugam improvisation language of his country, and discovering the catalog albums by Herbie Hancock, Miles Davis and Bill Evans. Born in 1989, the year the Berlin Wall came down, it was not easy for Sarabski to get the records of the American jazz greats that were not in their parents’ record collection. The slow opening of the former Soviet Union ultimately meant greater access to Western music in Azerbaijan. By the middle of the first decade of this century, Isfars had found its own musical language. Oriental scales harmonize with mugam, powerful rhythms and a rich foundation of jazz and classical chords.

The immediate sincerity of his music and its evocative, emotional content meet elegant, intellectual delights that simultaneously stimulate the mind and enrich the heart. In the ballad “Limping Stranger” , Sarabski has a solo spot after a deeply harmonious double bass monologue by Hampton, which perfectly illuminates his improvisational ability in all cinematic wholeness, always characterized by the burning urge for the melodic.

“Swan Lake” , the only third-party composition on “Planet” , brings Tchaikovsky’s ballet music closer to the current state of jazz with a radically new arrangement. “I am a big fan of classical music and have been attending theater performances, operas and orchestral concerts since I was a child. In my opinion, classical music is the foundation for all other forms of music, ”comments Sarabski.

“The idea for the arrangement of the fragment from ‘Swan Lake’ is the logical consequence of my ongoing search for parallels between modern and classical music.” Deepened in the solo piano passage of the two-part title track “Planet” he was so clever at this request, as if he wanted to secretly play Jazz in the style of Rachmaninoff. Freedom snapshots meet hidden cadences exercises that are not directly present in the first auditory impression.

“The album is called ‘Planet‘ because it summarizes my feelings and views about our planet, “explains Isfar. “The people, the events in recent years that have affected us all, and the new situations we have to deal with, I reflect in the compositions with the wish to enter into a dialogue with my audience.”

Perhaps that’s why, as the album progresses, one gets the impression of listening to both compositions and wordless songs. On the one hand, Sarabski’s pieces follow a logical correctness in their architectural structures. On the other hand, he puts melodic crowns on them that can be sung. This feat goes so far that one would like to practice listening just a little more closely in order to be able to read unwritten words in the melody guides.

In the relatively epic “The Edge” , the traditional Azerbaijani string instrument tar tells an almost mystical story about the culture of Sarabski’s homeland. Isfar wants the downright funky “G-Man” to be understood as an alternative form of dialogue to modern means of communication to the same extent as the whole album, he says.

“For me, music is dialogue, a dialogue between souls. Evoking deep, human emotions is the number one reason I create music. My preferred form of dialogue concept is the metrical and melodic freedom of jazz. The jazz form is extremely helpful in finding deep-seated, small, but important details of the soul. It is like some kind of code that cannot always be decoded, but it is unique in its appearance. That’s why I really wanted to make my record debut with ‘Planet’, a recognized jazz album. ”