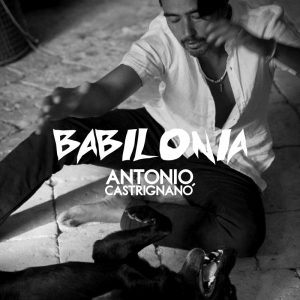 Paint your village if you have universal aspirations. But in today’s global village, with its instantaneous flows and time that scrolls away, mired in the present of billions of synchronized devices, being universal isn’t enough anymore. The artist’s task is to stop it, if anything, or anticipate it, letting us catch a glimpse of the world that is ‘coming soon’. And if you are born in a land of giants and visionaries, like the Salento, you also have to be prepared to deal with an immense musical tradition before you begin to realize your dreams.

Visionaries, sure, but firmly rooted in the land of their forefathers. Scion of the millennia and the tarantola and lucid interpreter of the present day, Antonio Castrignanò is a musician, singer, crafter of ecstacies and pied piper, a young cyclops who uses half his hundred arms to play his tambourines and the other half to hail giants from beyond the horizon, embracing and welcoming them like foreign potentates in his humble reign. Babilonia is the name he has chosen for his musical geography:

“It’s an album with all new pieces, and it tooka long time,” says Antonio, “to complete the writing in a way that would do it justice. They’re all original songs, new melodies, new stories and new rhythms, maybe borrowed from other places, like sub-Saharan Africa, Turkey and India. Babilonia is all of us. A world made of faces and souls that mutate, mingle and are transformed, but which cannot ignore the past, memories, roots and traditions, even those of the tiniest village or community. But you cannot look back with nostalgia: you must look ahead while looking more closely at the past and its teachings (humanity, dignity, work, respect, relationship with nature…), those universal values that are often found in contexts of absolute poverty and which represent an inestimable source of enrichment for modern societies.”

A record of Babylonian opulence, a collection of languages from all over the world, starting with the local
dialect, which addresses many universal themes, ancient and yet perfectly timely: the relationship between
man and nature, love, work, the feminine side of things. Antonio Castrignanò’s music comes from afar, after
a long personal quest: “It’s a personal need that continues to drive me, the need to seek out the source and bring
our young people closer to the music of an ancient ritual like the Taranta. A music full of life and passion,
which over time is enriched by sounds, colors, faces and stories, acquiring added significance and opening up
to the world, becoming communion, emotion, healing… light.” But Babilonia is not a record that looks back,
as is so often the case in folk music. No, “This is not traditional music, music that existed before. This is the
music of tomorrow. It speaks to the topics and uncertainties that hound us today, with a lexicon that is
purposely aimed at the young.”
The two singles released before the album followed the same line: Taranta World is an electric fantasy on the
pizzica, a blend of ritual flames and contemporary echoes. Masseria Boncuri, a place that stands for the fight
against the illegal recruitment of farm laborers, is a powerful groove of strings and percussion that draws on
Mediterranean sounds to tell the story of the exploitation of field hands in the Salento, in Apulia, all over the
world. The song features special guest artist Enzo Avitabile. In addition to the musicians who have always
backed Castrignanò, the record features contributions from numerous international artists: the Gambian
vocalist Sona Jobarteh, the only woman to play the kora – the African harp – and a member of the seventh
generation of a Griot family, the brilliant Turkish musician and producer Mercan Dede, the great Enzo
Avitabile, the historic vocalist of Sud Sound System, Don Rico, and the Senegalese singer Badara Seck,
pure energy personified.