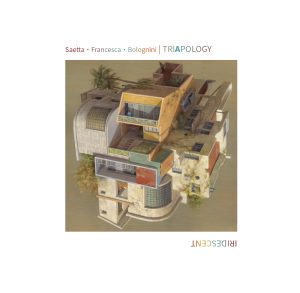 Iridescent is the second chapter by Triapology, band composed by Vincenzo Saetta (sax alto and effects), Ernesto Bolognini (drums) and Giovanni Francesca (guitars and effects), who replaced former member Michele Penta. It is a peculiar line up characterized by an unusual and hybrid sound, where electronic live elements are inserted on the original acoustic sound achieving wider timbric possibilities.

The album is scheduled for release on december 17th for Tuk Music on Cd and special digital edition.

Iridescent picks up and develops the research started with the first album Rockinnerage; the 3 musicians challenge a clever selection of rock classics (from Neil Young to U2 to Jeff Buckley up to  ‘Holocene’ by Bon Iver; the only exception being ‘Stoner Hill’ by Brian Blade which che ideally breaks the album in two parts) revisited through a jazz approach. Blending tradition, electronics and well known songs, the daring arrangements create an intriguing and original contemporary sound.

Still concerning arrangements, while these were more linear and schematic, they are now free, suspended and stretched, so that some melodies dissolve and recompose in the musical texture

The digital edition is double, and features and old project by Vincenzo Saetta, Ubik, originally released in 2012.
The core of the album was recorded with Andrea Rea on piano, Daniele Sorrentino on double bass, Luigi del Prete on drums, with Alessandro Tedesco on trombone and a string quartet as guests; two tracks feature a different line up with Antonello Rapuano (piano), Peppe Timbro (double bass), Giampiero Virtuoso (drums) e Vittorio Silvestri (guitar).

The album artwork is by the Spanish designer Cinta Vidal.
Cinta has been drawing since she was a kid. She studied at Escola Massana in Barcelona and  started working as an apprentice in a Scenography Workshop called Castells Planas where she learnt to love scenography and the backdrop’s crafts. She has never stopped experimenting, and has exhibited her paintings in Barcelona, LA, Hong Kong, and Melbourne.