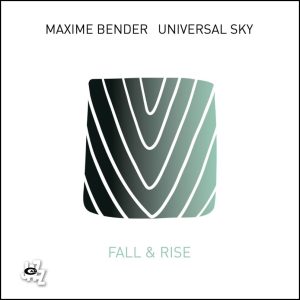 Individual, but recalling Wayne Shorter, the leader’s tenor and soprano saxophone works over beds of guitar, organ and drums that stay harmonically open, mobile and always graceful. In a period where self-written music is the norm rather than an exception, these tracks stand out in not drawing overdue attention to the writing process, preferring to deliver a strong, accessible musical message. Once the opening “Gravity” pulls you in, you’ll find yourself hypnotised by fine writing and subtle group arrangements that make this one of the most excitingly creative European recordings of recent years.

Maxime Bender’s composition are influenced by all kinds of musical genres throughout his life, from rock and pop to classical and jazz. Bender constantly seeks to evolve, be it as an instrumentalist or as a composer. As leader of different bands, he takes advantage of the particular natures of these projects to showcase his versatile facets as a composer and leader. He has released a number of albums, the most recent being Maxime Bender ”Universal Sky” under the Italian label Cam Jazz. Today, Maxime Bender is well known in the European jazz scene, having performed at several reknowend festivals as well as many clubs and other venues across Europe. Besides his own projects, Maxime Bender regular performs with German piano jazz icon Joachim Kühn.

Tenor and soprano saxophones, hammond organ, guitar, drums: Maxime Bender Universal Sky (Luxembourg/France) weaves a fabric of timbres that moves from intangible airy echoes to the pure energy of intermittent rhythms that portraying a perfect contrast between the four instruments. Bender proves to be a real mine of inspiration, sounds and ideas. He has the ability to constantly change registers and roles among the quartet-members, throwing open windows onto the most different sonic landscapes designed each time by his sax.

The cohesion of the quartet is absolute. The four musicians deliver small poetic masterpieces, in which melody and harmony merge into a soft cloud pervaded by a sweet, continuous sound. A panorama of sounds to be contemplated all by oneself for a while: all time well-spent. The quartet is currently recording it’s new album “Fall & Rise” (Cam Jazz) which is scheduled for release in fall 2022.

All music by Maxime Bender except track #10 Bruce Springsteen

Recorded in Tuntange, Luxembourg in September 2021 at Holtz Sound Studio by Charles Stoltz