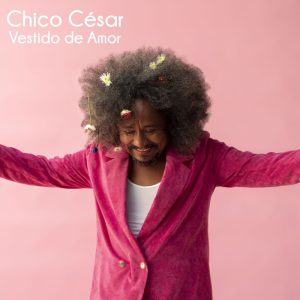 Vestido de Amor, the tenth studio album by Brazilian singer-songwriter Chico Cesar, digs deeper into the subject of Pan-Africanism, this time from the point of view of the diaspora. In 1996, the singer-songwriter born in Catolé do Rocha, in the desert area of Paraíba State, composed Mama Africa, an ode to the black woman, a single mother with dirty hands and a big heart. In 2022, in this global society where the question of cultural appropriation is so acute, it seems obvious that
Africa has fed all the cultural trends, but in turn has been nourished by them. Thus, Chico Cesar invited two great personalities of African music to contribute to Vestido de Amor: Salif Keita and Ray Lema.

As a result, Chico Cesar delivers an album with multiple colors, from the northern forro to the Jamaican reggae, from the Zairean rumba to the calypso’s languor, from the coastal fishermen’s coco to the urban rock’s electrics. Vestido de amor is nonetheless totally Brazilian. First album of Chico Cesar conceived outside Brazil, Vestido de Amor draws up a frank and playful statement of a mixed-race world where dancing is always possible, especially when, through joy, messages of peace, fraternity, but also of struggle, put back in the center of the game the love and the joy of the Nordestins.

And if love is a revolutionary act, the fusion music of Chico & Co is a stroke of grace.
(Veronique Mortaigne)

Man of the world, Man of struggle, Man of letters…that’s Chico César, the elfin genie of Brazilian music, with his incomparable look and copious creativity.
It was in Catolé da Rocha, in the depths of Paraíba state in the northeast of Brazil that Francisco (in Brazil, Franciscos always end up as Chicos) César Gonçalves was born in January 1964. His childhood was bathed in music and a regional culture that’s as rich as it is compelling. From an early age, Chico composed. He left his home at 16 for the state capital João Pessoa to pursue studies in journalism, which he financed by working in a bookshop. He sold books but he also read them, soaking up the great writers of his own country and elsewhere. Since, in Brazil, everything happens in the south, he left Paraíba to live in São Paolo, where he became a music critic and proof-reader for the Brazilian edition of Elle.

But he kept on composing and playing in the little underground venues of the city, forging friendships with artists from the Paulist avant-garde. Thanks to the intervention of the German-Brazilian Cultural Centre, he toured in Germany. The success he enjoyed there convinced him to devote himself entirely to music. He formed the band Le Cuscuz Clã, which also became the title of his second album. His first, Aos Vivos (meaning ‘Live’), which was released in 1995, was just that – live – because at the time nobody would invest a kopek in a new album by an unknown artist. So, he recorded one of his gigs, sharing the stage with other artists, including his contemporary Lenine, who guests on two of the tracks. Only the shrewdest listener would ever have recognised the album as the work of a beginner, such are its accomplishments. From the word go, César showed himself to be a brilliant tunesmith, lyricist, instrumentalist and singer. Applauded by the critics, adopted by the mainstream, he entered the realm of the greats at his first attempt. (Dominique Dreyfus, January 2021.)

The next few chapters of his story can be told though collaborations, tours and albums (thirteen at the latest count) on whose posters and credits the great names of Brazilian music are writ large (Chico Buarque, Nana Vasconcelos, Zeca Baleiro, Daniela Mercury, Arrigo Barnabé…) as are some international names: Sting, who won the Grammy for best male cover in 2001 with his version of Chico César and Ivan Lins’s ‘Soberana Rosa’ (‘She Walks This Earth’); the Spaniard Luis Pastor (whose album Pásalo was produced by César); Lokua Kanza (on the album Beleza Mano in 1997); Ray Lema (on a European tour in 2006); Richard Galliano (on the album Galliano au Brésil in 2014)…

Chico César, as they say, is a man of the world. Not in a globetrotting socialite sense, but a universal one. All you have to do is look at the diversity of his work. It establishes a dialogue between tradition and modernity and takes us to the four corners of time and of the Brazilian, African, Caribbean space. Not that he delves into the repertoire of other artists – or at least, not that much. It’s just the disconcerting ease with which he achieves fluency in all the rhythms that fall under his guitar (in 2018, his album Estado de Poesia won the Brazilian Music prize in the rock, pop, reggae, hip hop and funk categories!). Especially those rhythms that draw him closer to his African, Amerindian and regional roots. Maybe because Chico César is man of struggle, a man committed to social justice.

In his music, as in his actions (he took several years off from his career to head up the Secretariat of Culture in Paraíba state) he’s in the thick of all the right struggles. Against racism for a start. The title and eponymous song of his 5th album reads like a manifesto: Respeitem Meus Cabelos, Brancos (a hard to translate pun that can either be read as ‘Respect my hair, whiteys’ or, if you ignore the comma, ‘Respect my white hair’) in reference to the frizzy hair that common Brazilian racism likes to call ‘bad hair’, just as one might say ‘bad weed’. Positioning himself openly against the errant machinations of those in power, he publicly defends oppressed minorities (Amerindians, gays, blacks, women, the poor), and is involved in environmental causes…a struggle that inhabits his lyrics, both in a political and poetic way.
Because Chico César is also a man of letters.

The former journalist, author of three collections of poetry, lover of the finely-tuned phrase, possesses a superb gift for juggling words. He wields the language of protest with intelligence and lyricism. If you wanted to name a creative precursor it might be Caetano Veloso. Like him, Chico César is a bard of his time, and like him, he’s also a timeless artist. But above all, Chico César is a great musician.