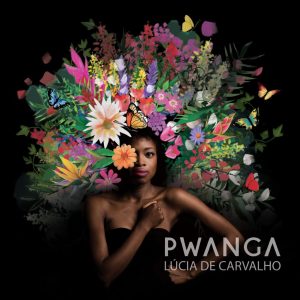 The art of rooting the light.

Lúcia de Carvalho is an alchemist, a seeker of sense, a kindler of essence. Her voice transmits vibrations that heal and transform; her drum transmits the voice of the ancestors, inviting us to reconnect with our deepest selves. Voice and rhythms unite in the service of beauty: the beauty that inhabits us and the beauty that surrounds us. For those ready to cast off and set sail, her hybrid universe will act as a beacon, inviting us to hold our course despite winds and tides. Everything is there. All we have to do is get on board and let ourselves go.
The little girl born in Luanda certainly had no inkling of the improbable twists and turns her destiny would take, as she listened to her mother singing to alleviate the burden of long days spent raising her five daughters. The mother took her three youngest daughters with her when she left for Portugal and placed them in a reception centre, mostly for children of African where she quickly adapted to local life, even though she missed her mother who stayed in Portugal, even though she had no intention of forgetting her African roots.

origin, while she went off to look for work. Lúcia spent some wonderful years there, amongst all the games, the songs, the women who looked after her and her sisters. She was 12 years old when she was told that she would be going to live with a foster family in France, together with her two sisters. That’s how she ended up in Meistratzheim, a little village in the Alsace

They resurfaced in an unexpected way: a Brazilian band happened to play in her village, and in their Brazilian rhythms, dances and songs, she found the same joy and force of life she had known in her native Angola. The radio station she had loved listening to as a child used to broadcast Brazilian pop tunes all day long. It was with that band, Som Brasil, that she took her first musical steps, progressing from backing vocalist to lead singer, moving from dancing to drumming and immersing herself for ten long years in a luxuriant bath of traditional Brazilian rhythms. But the joy of singing on stage never got the better of the thirst she felt for her own Angolan roots.

In 2008, she decided to embark on a solo career and write her own songs. The release of her first EP, Ao descubrir o mundo, three years later, revealed an all-encompassing passion for rhythm, a love of Brazilian sounds, and a desire to give her heritage a chance to reach out and travel by clothing it in rock and reggae flavours. “Quem Sou?” “Who am I?” That was the question she asked herself in one of her songs, a question that had long haunted her as she attempted to navigate between France, her Angolan roots and the promised land in Brazil. She met Edouard Heilbronn, a young bassist from Alsace, who had just spent three years roaming distant parts of the planet, finishing his journey in the city of all the saints and all the rhythms: Salvador de Bahia. What was bound happen, happened, and they began to share their life and their music, working together on their compositions, playing everywhere they could, gifting audiences with Lúcia’s dazzling solar energy.

Then, with a demo for a new album in their pocket, they set off together on a long journey, both musical and initiatory, that took them to Brazil and Angola. There they encountered wonderful musicians who contributed to the album. But, above all, they visited Lúcia’s mother, whom she had finally managed to track down. Kuzola (‘Love’ in the Kimbundu language of Angola), was the title of the album that was released in 2016, and of a moving documentary that retraced Lúcia’s quest for her roots and offered some answers to her questions about her own identity: “All those journeys to retrace my story enabled me to create a picture of who I was: the roots are Angola, the branch is Portugal, and the flower at the end of it is Brazil. And France is the ground in which that flower was given a chance to grow.”

If Kuzola was a quest for meaning, the quest this time is for the essence. “Neither Angolan, nor Brazilian, nor French, I realised I was more than all that…There’s something deeper that defines me, an immutable essence that carries me and makes me feel intensely alive. Once all the ‘you’re black, you’re white, from Alsace, this and that…’ is put to one side, what remains? Well…this remains!” In this time of constant questioning and identity malaise, Lúcia’s joyful and positive experience is worth contemplating. It has enabled her, always in partnership with Edouard Heilbronn, to strike out into new territory on this her third album, recorded and mixed by Jean Lamoot (Mano Negra, Noir Désir, Alain Bashung, Dominique A, Souad Massi) at Studio Ferber in Paris. Of course, Africa and Brazil are still there on Pwanga, forming the heart of Lúcia as she lives and writes to the beat of the drum, finding words, melodies and rhythms on the same impulse; a raw diamond that her accomplice polishes, enriching the harmonies and sonic imagery and turning the songs on the album into travel films.

Other outstanding participation in this luminous repertoire are the illustrious Brazilian singer Chico César, the powerful and warm voice of singer Anna Tréa, and two veterans of Angolan music: percussionist Galiano Neto and producer-guitarist Betinho Feijo, known for their long-standing work alongside the great Bonga Kwenda. While the virtuoso Zé Luis Nascimento (Mayra Andrade, Ayo, Cesaria Evora) knew how to enhance the essence of each title with his original and varied vocabulary between Brazilian, Eastern, and Western percussions.

The Universe of Song ‘Desperta’ transports us to the east and its wisdom, flirting with the colours of Europe and central Asia in voices that get up close and personal with the mystical flights of qawwali music. It’s all about an awakening of consciousness of oneself. ‘Happiness’ douses us in a gospel-tinged chant, the intimate prayer of one who has found peace in her heart, far from the heartaches and ruptures of the world and all its external storms. A moment of interaction with gnawa musicians from Morocco inspires the colour of ‘Saeli’, a name cradled by the sand-laden winds of this ode to the beauty of birth, that of the firstborn. And in ‘Phowo’, sung in Chokwe (a language commonly spoken in the Congo, Angola and Zambia), Lúcia brings our attention back to the women who spend their days in the fields, near Huambo in the heart of Angola. One of Lúcia’s friends worked with them, encouraging them to write poems in praise of themselves as a means of rebuilding their self-esteem. “Through struggle, through tenderness, God has made me strong,” one of them goes. “There are those who hate us, or who see us as weak, but in me there’s a strength that carries all humanity.” Magnified by Lúcia’s voice, these poems proclaim the luminous power of those women. As they gather for the last photo, they’re asked: “Pangwa ni Puy?” “Light or Darkness?”

Pangwa! (‘Light’) is the title of Lúcia de Carvalho’s new album. Just like those women, it allies gentleness to power, meaning to essence, the light to the deep roots of a tree born in Africa, whose branches embrace the world, whose flowers appear as songs. It took a while her to realise, but her own name proclaims her vocation and has done right from the very beginning. Lúcia, ‘light’, of Carvalho, ‘the oak’ in Portuguese: the strength of the tree. A revelation that aptly sums up her poetic and human quest: “to root the light.”