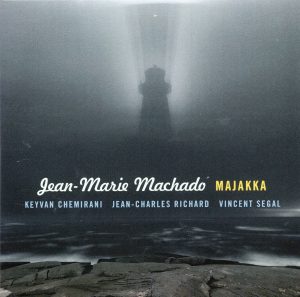 Jean-Marie Machado’s music does not suffer from borders and hybridizes to make cultures and languages intertwine. In this album, the pianist brings together, under the pretty name of Majakka (the Finnish word for lighthouse), various pieces that have brought a particular colour to his musical journey, inspired by his cultural heritage, his encounters and his prolific career as a composer. Pieces of life and music which are guiding him like the light of a lighthouse…

„For the first time I felt like looking back and listening to some of my old records again,“ Machado narrates. „I saw a colour come out and it was becoming mine, a light that imposed itself. I felt the need to accept something that had happened in spite of myself“ he adds.

So the idea was born of bringing together pieces that seemed to be from the same family, sharing the same colours and cultivating a closeness to the Brazilian music and that of the Spanish impressionists that pave Machado’s way.

Thus, „Bolinha“, „Um vento leve“ and „Emoção de alegria“ come from the project „La main des saisons“ based on the work of the poet Fernando Pessoa;

„Les yeux de Tangati“ had been written for a duet with Dave Liebman, the great New York saxophonist Machado has recorded three albums with, and „Gallop Impulse“ is taken from the album ‘Impulse Songs’ (Label Hortus, 2018), on which we could already hear the zarb of Keyvan Chemirani, who reunites with Machado on Majakka.

„After collaborating with Naná Vasconcelos, I tried to meet musicians who were playing digital percussions,“ Machado recalls. „Playing with the tips of your fingers and not just the palms brings percussion and piano together and unifies them. I was very much interested in the profile of Keyvan Chemirani, who knows tradition but is also open to the most modern music. He is the free electron of the quartet and creates the unexpected with his improvisations“.

Machado also gets close again to Vincent Segal here: „We crossed the road of Vasconcelos at the same time“ he says. „I immediately noticed that this musician was completely open to all kinds of music. We find ourselves right where we left off with all the experience of the music we played. The philosophical idea is the same, our concern is to meet other music“.

Saxophonist Jean-Charles Richard, who is used to Machado’s projects (he has been a member of the Danzas orchestra for twelve years), completes the quartet: „He is a very intelligent performer; he is the quartet’s melodist, the one who carries most of the songs. He knows my music by heart; emotionally speaking, he is my closest musician”.

Moving and inspiring, Jean-Marie Machado’s music creates bridges, suggests images, opens passages. “Majakka is a group of enlighteners. This music of passage, this is perhaps the true contemporary music“ says the man who defines himself as „a composer of the written word, who uses improvisation as a disruptive element“.

For the recording of the album, which took place last September at La Buissonne studio, in an obviously disturbed context, Machado composed several original pieces for the quartet:

„Les pierres noires“, „La mer des pluies“ and „Outra Terra“, written on the spot, to bear witness both to a change in personal life and to a profound transformation of our Earth that is our common concern.

The melodies, the sounds, the tones, the rhythms, the evocative titles of the pieces… everything is rich and generous on Majakka. Poetic, chiseled, sometimes in delicate roundness, sometimes with great fervour.

The quality of the writing and arrangements, combined with the excellence of the performers (Keyvan Chemirani bursting with inventiveness and surprises, Jean-Charles Richard a sensitive melodist with a dazzling sound, Vincent Segal elegant with virtuosity, an expert of the sounds of the world) once again underlines the accomplishment of Jean-Marie Machado’s path.

„The richness of the colours, of the motifs of a written programme combined with the improvisations of the skin drums, is fascinating.“ Alice Leclercq, Citizen Jazz