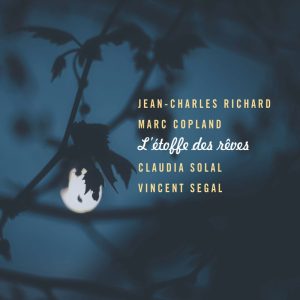 An adventurous musician, Jean-Charles Richard studied at the CNSM in Paris, where he obtained a first prize in classical saxophone and a diploma in jazz. Holder of the CA of classical saxophone and jazz and a DEM of analysis, he is in charge of the class of specialized jazz and improvised music cycle at the CRR of Paris, and of the Pôle Supérieur Paris – Boulogne-Billancourt.

Out of a taste for extremes, he chose to devote himself to soprano and baritone saxophones. His curiosity for all the territories of music led him to perform in classical orchestras
(Orchestre de Paris, Orchestre des Prix du CNSM), big bands (George Russell, Antoine Hervé, Jean-Loup Longnon), in street bands (La Bête a bon dos), singers of variety, and to rub shoulders with contemporary composers (Karlheinz Stockhausen, Thierry Escaich, Alain Margoni).

Together, he puts his qualities as a performer, composer and improviser at the service of many collaborations with Dave Liebman, Didier Levallet, David Patrois, Bernard Struber, Jean-François Baëz, Claudia Solal, Eric Löhrer, Didier Ithursarry, Daniel Humair,Peter Herbert, Wolfgang Reisinger, Pauline Bartissol, Eric Prost and many others.
Since 2006, he has conducted numerous orchestras, whose repertoires are at the crossroads of jazz and classical music: Sketches of Spain by Gil Evans, with David Liebman as guest soloist, Cityscape by Claus Ogerman, Impressions by Jean Marie Machado, or Martial Solal’s Newdecaband with the Lyon Opera Orchestra.

In his important discography, we often find his collaborations with the composer / pianist Jean-Marie Machado, projects released under the label La Buissonne: Pictures for orchestra (2019), Majakka (2021). Jean-Charles has an important place in the next project “Cantos Brujos” always in the great orchestra of Jean Marie Machado. This project inspired by Manuel de Falla landscape will appear on the same Label in February 2023.

L’étoffe des rêves” was naturally born from my strong desire to work with Marc Copland, so moved am I by his sound and his harmonic language .
In this album, Jean Charles Richard’s musical, literary and emotional influences have woven a music endowed with rare poetry.
From the saxophonist’s compositions to allusions to Claude Debussy, from a nod to Mussorgsky to the interpretation of Messiaen, this opus reveals a range of colours and images served by the harmonic science of the pianist for whom these timeless pieces seem to have always been intended.
Here the mood is thoughtful. There is nothing demonstrative about these high-flying musicians. Just a sharing, an openness flirting sometimes towards a calm, sometimes gentle, melancholy.
The fatal destiny of Shakespeare’s Ophelia (Hamlet), also taken up in Arthur Rimbaud’s poem, is served by Claudia Solal’s precise, clear and gentle voice and the reassuringly and light tone of Vincent Ségal’s cello.
Diaphanous baritone, harmonies of twilight, in this suspended time the volatile confidences of this delicate quartet are cradled.