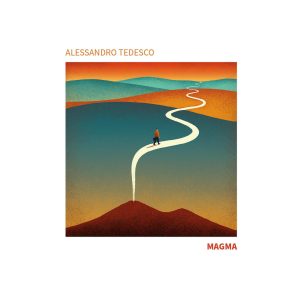 Performing with Dave Douglas on top of the Vesuvio volcano last summer at Pomigliano Jazz was so intense that Alessandro Tedesco drew inspiration from that concert for his new album “Magma”, his second for Tǔk Music, scheduled for release on May 7th.

It is a concept album on the volcano, a key place around which revolve many of the activities of both musician and human being born in Campania indissolubly linked to his life and music stories.
It could also be seen as a metaphor of the creative act, which erupts unstoppably and takes unpredictable directions.

Alessandro Tedesco, trombone and electronics, is joined by Federico Luongo on electric guitar, Mario Nappi on keyboards, Angelo Funaro on tuba and Vittorio Riva on drums for a multifaceted and musically varied album.

In the group’s characteristic sound for this album the electric bass is replaced by the tuba, giving a new acoustic shade to the electric instruments.

Magma unfolds between intricate rhythm patterns and compelling melodies such as “Atrio del cavallo” and “Eruzione”, brooding and soft atmospheres like “Il golfo al tramonto”, and the energy release of “Scappa Via” or “Terremoto”.

Album art is by Davide Bonazzi, freelance illustrator born and raised in Bologna, who studied at in Milan at IED – European Institute of Design and at the Academy of Fine Arts of Bologna. His style combines digital media with textures of scanned found objects and has been recognized by The Society of Illustrators of New York, American Illustration, Bologna Children’s Book Fair; his work has been published by The New York Times, The Wall Street Journal, UNESCO, Wired to name but a few.