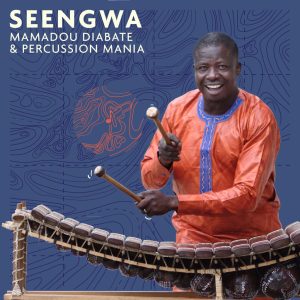 Seengwa is a tribute to the almost forgotten musical traditions of the Sambla people of the region of the same name in Burkina Faso. The Sambla are one of the very rare peoples in the world who have developed a language with the xylophone (the Sambla call it balafon). This music is actually the tonal language of the Sambla people translated into music, a function known as surrogate speech. Musicians who don’t comprehend this language are unable to master this instrument.

Mamadou Diabate connects them with the “here and now” by working with top-class musicians from Europe and his homeland. The renowned Austrian jazz saxophonist Wolfgang Puschnig is just one of the 6 musicians who complement Mamadou Diabate’s 6-piece “Percussion Mania”. In the song “Duniya banaba”, the balafon language is translated into French for the first time by the poetry slammer Malika La Slamazone from Burkina Faso.

Seengwa takes the listener on a rhythm journey – from tradition to modernity. Mamadou Diabate and Yacouba Konate provide the basic tone with their two balafon as lead instruments and lead into African spheres through djembe and calabash, enriched with wonderful melodies and polyphonic singing by two female vocalists, strings, piano and kora, as well as electric and bass guitars.

Mamadou Diabate’s extraordinary creativity is a never ending stream of musical creations, keeping his important and special culture and music traditions alive. Without a doubt, his virtuosity will continue to enrich our world.

Mamadou Diabate is an award winning balafon master and composer, born in Burkina Faso, now based in Vienna, Austria. Mamadou comes from a traditional “Jeli” family of music making and storytelling among the Mande peoples. His professional music education began at the young age of 5 years old. His virtuosity is outstanding—some people say he would have more than two hands. His self-developed technique allows Mamadou to play exquisite balafon solos which create the impression that three balafonists are playing together.

Mamadou Diabate is one of the world’s best instrumentalists on the balafon, an archetype of the xylophone whose wooden sound bars are reinforced with gourds (hollowed out gourds) attached underneath and are also covered with a resonating membrane made of paper or plastic, which gives the percussion instrument its very own sound. Not only the sound itself, but also the musical genius of Mamadou Diabate is enchanting. His compositions pay homage to a millennia-old West African culture and tell the stories of the Sambla people in an entertaining way.

Mamadou Diabate & Percussion Mania is a firework of virtuosic balafon playing and rhythm and is characterized by two balafones as lead instruments. That makes the project the only formation of its kind worldwide, different from all other West African bands. Musical dialogs and spectacular balafon duels between Mamadou and his cousin Yacouba Konate are one of the highlights of the show.

Since 2001, he has released 13 albums. The album “Keneya” was the world premiere recording of the traditional balafon music of the Sambla people. Mamadou has been teaching the Sambala Balafon language at various Universities in the USA and Canada. He continues his collaborative residency work with linguistics professor, Laura McPherson at Ivy League academic institution, Dartmouth College (USA), exploring “The Language-Music Connection.”

Mamadou Diabate lives in Vienna, Austria. In 2010 he opened a school in Burkina Faso where 600 children are currently being taught free of charge.

APPENDIX:    (a) Additional information about the Sambla people (Burkina Faso)

(b) Explanations about the songs of the album Seengwa

linguistic project:     The Talking Balafon of the Sambla

Further dates are being planned.