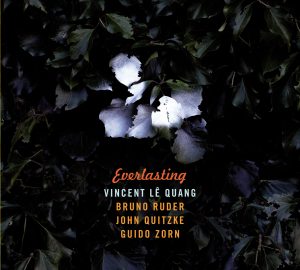 If music fortunately takes on its own secret meaning for each listener, it is the idea of urgency confronted to what we thought eternal that guided my conception of Everlasting. Just as constantly refreshed ink brings an etching back to life, it is also a look back into the past and a way to allow it to brush up against us, here behind a medieval melisma, there through the evocation of a ballad…

His trio with Jeanne Added and Bruno Ruder was acclaimed by critics for their yes is a pleasant country (coup de Coeur de l’Académie Charles Cros). He continues exploring in more depth his own “Poetic Jazz” with this new record with the quartet he leads. A lament from an Orient dreamed of, Mitteleuropa harmonies, swing from a certain America: if Jazz is cross fertilization, here resonate unexpected accents that bathe his compositional universe.

It is the idea of urgency confronted to what we thought eternal that guided my conception of Everlasting. It is also a look back into the past and a way to allow it to brush up against us, here behind a medieval melisma, there through the evocation of a ballad… Vincent Lê Quang, Joe Quitzke, Bruno Ruder and Guido Zorn take us on a journey with the fluidity of their music, that leads sometimes to a rare incandescence. But far from being a series of postcards washed up from dead shores, it is a whole, shrouded in mystery, that we are invited to share, music from within, the Inner Space as Michaux would say, which seeks through the forest of sounds the eternal newness of emotion.

Curious and eager to work in a variety of musical languages, Vincent Lê Quang’s activities have led him to work in the fields of jazz, classical and contemporary music as a performer, improviser, conductor, composer, and teacher. A gifted saxophonist, he has developed a specific, immediately recognizable sound and style with tenor and soprano saxophone.

Following his discovery in 1999 of the “Soundpainting” created by Walter Thompson, he integrated concepts from this live composition language into his music, constantly refining and re-working the techniques involved. He has been an active member of the Walter Thompson Orchestra.

Vincent Lê Quang is regularly invited to perform with ensembles, to teach and give master-classes in world-class institutions, including the Paris Conservatoire, the Colburn School of Music, the Geidai University in Tokyo, and has been commissioned to write works (Alla Breve Radio France, Ensemble Cairn). He performs with Daniel Humair, Aldo Romano, Henri Texier, László Fassang, Jeanne Added in major venues, including the Library of Congress (Washington DC), the Tchaikovsky Hall (Moscow), the Palace of the Arts (Budapest, and the Cité de la Musique (Paris). He founded his quartet with Bruno Ruder, John Quitzke and Guido Zorn, and produces a distinctive body of compositions. He has taught Improvisation at the Paris Conservatoire since 2007.

Bruno Ruder graduated from the CNSM in Paris in 2003 with a first prize. There he met Riccardo Del Fra with whom he has since recorded several albums. In 2002 he founded the trio yes is a pleasant country, still active today, with Jeanne Added and Vincent Lê Quang. He participated for four years in the adventure of Magma (several albums and DVD), then joined Radiation 10 (Bossa Supernova – 2013).

In 2012, he began a solo piano work, concretized by a record, Lisières, released in 2014 and awarded a “Choc” by Jazz Magazine. In January 2016, during a residency at the Lyon Opera, he created a quintet that he co-leads with Rémi Dumoulin, featuring Aymeric Avice, Guido Zorn and Billy Hart. The quintet recorded the album Gravitational Waves in concert, which critical reception was enthusiastic.

John Quitzke was born in Linköping in Sweden, and grew up in Malaga (Spain). After his studies in SKFHS in Malmö, he setteled in Paris and studied in IACP and in Paris Conservatoire (CNSMDP). He soon played and recorded with François Jeanneau, David Liebman, Gábor Gadó. His sensibility and flexibility makes him a demanded sideman by artists like Norma Winston, Claudia Solal, David Lynx, André Minvielle, Peter King, Ablaye Cissoko. Within the groups of Pierre Durand, Matthieu Donarier, he reveals a creative and singular voice on the drums.

His long term collaboration with Vincent Lê Quang has refined the music of the quartet for a subtle balance between strictness of composition and fluidity of improvisation. Involved with the young generation, John Quitzke teaches Jazz and Improvised Music in Paris CRR.

As a child, he switched from guitar to electric bass and then to double bass. While studying classical music at the Luigi Cherubini Music Conservatory in Florence, he further deepens and improves his experience in jazz playing and records with Stefano Battaglia, Fabrizio Bosso, Marco Tamburini, Gabriele Mirabassi, Cristiano Arcelli, Luca Santaniello.

At 23 he moved to Paris and graduated in Jazz Music at the Paris Conservatoire (CNSMDP), with Riccardo Del Fra and Daniel Humair. He stayed in Paris for ten years where he joined the lively environment of jazz and improvised music of the city, carrying on his musical projects (Le Monde De Kota, Rockingchair with Airelle Besson and Sylvain Rifflet) and sideman activity with Alain Jean-Marie, Nguyen Lê, Youn Sun Nah, Aldo Romano, Glenn Ferris, and occasionally Johnny Griffin, Phil Woods and Michel Legrand. For three years he played mostly with French singer-songwriter Renan Luce. In 2012 he moved back to Florence where he resumed collaborations with Italian musicians and other passing artists (including Joe Cohn, Scott Hamilton, James Newton, Jesse Davis). At the same time, he continued his activity with French bands like the Bruno Ruder Quintet with Billy Hart, the Vincent Le Quang Quartet, the Pierre Durand Roots Quartet. As a performer and improviser, he has been part of the Tempo Reale Centre’s electroacoustic music productions, working with composers Sylvano Bussotti, Daniele Lombardi among the others. He is double-bass teacher at jazz department of Scuola di Musica di Fiesole in Florence.