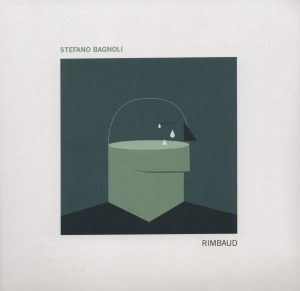 There was a time that i used to read the damned poets, Rimbaud, Baudelaire they were desperate those poets, and I dont
know if they could foresee what was to come. Poets are always ahead of their time.
Mario Rigoni Stern

Rimbaud is the new album by drummer and composer Stefano Bagnoli.
Even though its not his debut record as a leader, its his first album recorded completely on his own. It is also his
debut album for the Paolo Fresu Tǔk Music label.
Bagnoli was already featured in the TǔkMusic catalogue as a member of Devil Quartet with whomhe has released
two albums, Desertico in 2013 and Carpe Diem in 2018, and also as a member of Dino Rubino trio on the Miriam
Makeba inspired Zenzi project released in 2012.
On Rimbaud Bagnoli not only plays his usual drum kit but piano, keyboards, vibes, double bass and electronics
as well. The only concession is the cameo by Umberto Petrin who in the final track reads a sentence by the famous
poet which sums up lifes melancholiic serenity:  I hung wires from bell tower to bell tower, wreaths from
window to window, gold chains from star to star, and I dance
The album is a tribute and almost a biography in music: Bagnoli draws inspiration from suggestions born out of
emotions sparkled by reading the poets works and the many essays about him, and also from some key events in
the great French poets life: the portrait is both passionate and compelling.
The figure of Rimbaud can easily be compared to the the jazz greats like Charlie Parker, Thelonious Monk and
Louis Armstrong, but also to shortlived giants like Bix Beiderbecke and Jimmy Blanton.
The artwork image is by Sevilla born designer and illustrator Errata Carmona who after a self taught education,
has attended formal studies. His works have been published by Boston Globe and The New York Observer.
Its not the first time that Tǔk Music has featured an international artist work as album artwork, after Karin
Kellner, Pilar Cossioand Joanna Gniedy, to underline the global vision of the label.