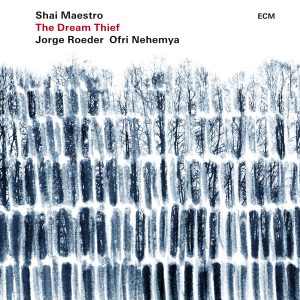 The Dream Thief, the first ECM release by Maestro as a leader, presents the Israeli pianist fronting the latest incarnation of his uncommonly interactive, atmospherically expansive trio, featuring new drummer Ofri Nehemya, a fellow Israeli, and its bassist from the start, Jorge Roeder, a native of Peru. The album also includes several searching solo performances by Maestro. His solo interpretation of Israeli singer-songwriter Matti Caspi’s “My Second Childhood” raises the curtain on a program of characteristically vivid Maestro originals.

Maestro, who made his first ECM appearance on vocalist Theo Bleckmann’s 2017 album Elegy, made a name for himself playing in Israeli bassist Avishai Cohen’s popular band from 2006 to 2011. A resident of Brooklyn and a dual Israeli and American citizen, the pianist also played in star drummer Mark Guiliana’s quartet and has recently worked in a duo with saxophonist Chris Potter. After four trio albums with Roeder and drummer Ziv Ravitz, Maestro drafted Nehemya into the group, which gathered to record The Dream Thief at the studio in Lugano. Maestro chose the darker-toned of two Steinway model D pianos on offer, apt for what he calls “the dreamy, cinematic quality” of the music he had written for the session. With Manfred Eicher producing, the atmosphere in the studio was one of being “open to the magic of the moment,” Maestro recalls. “I had a clear intention for the pieces, but I knew that Manfred likes to let the music breathe, to get to the essence of the music. For instance, my composition ‘Lifeline’ had been a double-time burner live, but Manfred suggested that we take it down about 50 bpm and concentrate on making the melody sing, in the way Charlie Haden might do. That really transformed the tune.”

Another spontaneous creation was Maestro’s solo performance of Caspi’s “My Second Childhood,” a song about experiencing life anew via the eyes of a child. The Israeli composer is one of the pianist’s “all-time favorites – I grew up listening to him, and even took lessons with Caspi when I was 12,” he says. “I had arrived at the studio early before Jorge and Ofri, just to commune with the piano. I hadn’t planned to include that tune, but it just came out, as it’s so deep in my system. I have a real appreciation for the DNA of a great song, where the melody and the harmony go perfectly together. It’s the same thing with ‘These Foolish Things,” which is also such a beautifully crafted song. I was just improvising, and it morphed into a kind of avant-garde treatment – yet with the melody still like a red thread wound through it.”

Maestro and Roeder have played together for about seven years, developing a synergistic partnership even though they come “from the opposite ends of music in a way,” the pianist explains. “Jorge has experience playing a lot of free music, while I studied both classical and jazz and have played a lot more arranged, rhythmically defined music. I’ve become freer playing with him. He can travel back and forth from off the grid to in the pocket, and he has such great ears. I can take the music where I want to go, and he’s right there with me, where we can almost improvise in unison.” Although Nehemya is new to the group, he and the pianist have an innate kinship. “Ofri and I share a lot of influences – we don’t even have to talk about things to come to the same emotional expressions,” Maestro says. “But he also has an advanced, new-generation rhythmic understanding, so he can really push and challenge Jorge and me.”

Whether it’s “going with the melody or really burning and playing free, we always try to be attuned to the moment, trying to find that magic in it,” Maestro says. “With ‘Lifeline,’ ‘The Forgotten Village’ and ‘A Moon’s Tale,’ we were concentrating on melody, while rhythmic interplay was the focus of ‘The Dream Thief’ and ‘New River, New Water’.” As for the deeply moving end piece, “What Else Needs to Happen,” incorporating parts of speeches by Barack Obama, the pianist explains: “An acquaintance of mine, the saxophonist Jimmy Greene, lost his little daughter in the massacre at Sandy Hook, Connecticut. These school shootings in America have become so common, almost ‘normal’ – it’s surreal, insane. When I realized what happened for Jimmy and the rest of those parents, it felt so close – it was heartbreaking. I understand that in jazz a piece like this I could be ‘preaching to the choir,’ but ‘What Else Needs to Happen’ is about being open to the moment in another way. I think performing artists, because we have a stage, have a responsibility to speak about the world we live in today. Maybe the combination of Obama’s words and the music will help people hear and feel the emotional reality a bit more. It is, for me, at least some measure of resistance to that horrible new ‘normal’.”