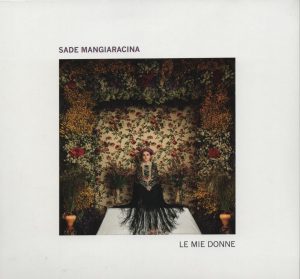 Le Mie Donne is the new album by pianist and composer Sade Mangiaracina.
This is the debut album for the Sicilian musician on Paolo Fresu Tǔk Music label, even though she was
featured on the Luca Aquino aQustico album released in 2013.
Le mie donne is a tribute to women, through a gallery of portraits of female figures who with their
courage and strength have established themselves against discrimination, prejudices and common
feeling: from Rosa Parks to Amelia Hearheart, from Coco Chanel to Anna Frank, through Malala
Yousafzai, Rita Atria, Fida Kahlo and nobel prizewinner Aung San Suu Kyi.

Sade has composed and arranged all the tracks, that highlight her mediterranean soul in the context of
improvisedmusic.With her there areMarco Bardoscia on double bass and Gianluca Brugnano on drums,
while guest spots are by saxophonist greg Osby, who has also written the liner notes (and produced for
his label Inner Circle Sades previous record, la Terra dei Ciclopi) and tunisian Ziad Trabelsi on Oud
and vocals on the track dedicated to Malala.
The artwork image is by Spanish photographer Daniel Ochoa De Olza of the famous Associated press
agency and winner of several awards likeWorld Press Photo, National Press Photographers Association
and China International Press Photo Contest.