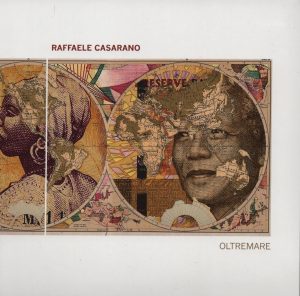 Raffaele Casarano is one of the most talented and well known musician of the new Italian jazz generation and
one of the most representative artists of the Tǔk Music roster, the label founded by trumpeter Paolo Fresu.
Oltremare is the fourth album released on label.
On this record, mastered by the great engineer Giovanni Versari, Raffaele leads an international quartet which
includes Manu Katché on drums, Eric Legnini on piano, Fender Rhodes and synth, and Lars Danielsson on
doublebass. Two tracks feature Danno on vocals, member of the historical Roman hip hop band Colle Der
Fomento.
It is an ambitious project in which the apulian talent directs a dream band with authority and generosity:
Casarano has composed and arranged all the 13 tracks of the album, showing profound maturity.
The group plays as a unit, all the elements are perfectly integrated and in balance: only the music emerges as
the real protagonist.
The saxophonist sets the ground for a musical research that encompasses diverse and coherent genres like
gospel, soul and hip hop.
These sounds are close to his soul, as he is back from many tours in Africa during which he had the chance to
collaborate with several musicians from Zimbabwe and South Africa: an experience which deeply marked the
realization of this album

Thanks to Casaranos spiritual approach the album develops like a lithurgy, the music soars serene like an
antidote to our troubled times, an hymn to freedom and to mankind trying to overcome its limits.
First single from Oltremare is the title track, with lyrics composed and sung by Danno.
The song is accompanied by an extraordinary lyric video realized by Augusto Murgia, sponsored by the
Lampedusa City Administration and in support of the Medecines Sans Frontieres campaign #Umani.
The track, which sums up the essence and the spirit of the whole record, tells about migrants traveling to a shore
and a way out, but at the same time is a metaphore of something intimate and existential.
Traveling not to only towards salvation, but as a place and non-place of reflection on ones condition of human
being, discovering ones self.

The album artwork is by wonderful artist Malala Andrialavidrazana, born in Madagascar and now living in
France. After an education as architect Malala focused on visual arts and photography winning the HSBC award.
Her work has been exhibited all over the world, from Cote Divoire to Mali, from Israel to China and in many
European countries.

The cover and other booklet visual elements belong to the series Figures, in which the artist juxtaposes
disparate elements like 19th century maps, banknotes and artworks that have marked her generation. In this
way she operates a perspective shift of the way in which we look at the materials she addresses, and makes us
reconsider our worlds knowledge, especially with the current situation dominated by globalization. The visual
elements of the banknotes amplify this vision, true symbols of the economic domination from the colonial years
which still persists even after the declaration of independence.
The album has been produced with the invaluable contribution of Valentino Nicolì and Aver Cura, a company
that has been dealing for many years in artistic restoration, and shares with Casarano the same vision of the
world and of human beings.