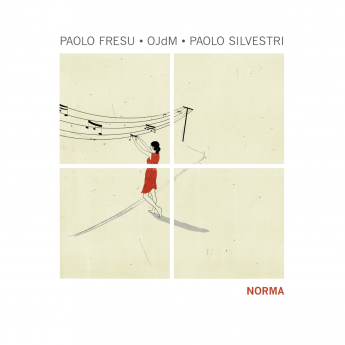 “Norma” is the new album by Paolo Fresu with the Orchestra Jazz del Mediterraneo and Paolo Silvestri and is scheduled for release on October 18th on the trumpeter’s label Tǔk Music.

It is definitely not simple to make the musical score of a true opera masterpiece such as Norma by Vincenzo Bellini meet with the world of jazz. But in the truest sense of interpretation and of free adaptation typical of the afroamerican music world, in the same way in which jazz mastered the great american songbook around 1950’s, it looks possible and appropriate to have the freedom of revisiting a landmark of the opera tradition through the lenses of the freest among the modern musical forms.

Paolo Fresu, omnivore of contemporary musical art, respectfully tributes the work of Bellini and with just one sentence describes what this project is about: “it’s the plain revisitation in its instrumental version, where the trumpet takes the place of the voice, of some of the beautiful arias of Norma by Bellini, produced in Catania and taken to the contemporary era thanks to the magisterial pen of Paolo Silvestri”.

For this reason it is noteworthy that Fresu decided to include this album in his label branch dedicated to voices.  It’s the sound of the trumpet instead of Maria Callas voice, who was the sublime and peerless interpreter of the score of the Catania born musician. “The trumpet becomes voice” was the title of a sicilian newspaper at the time of its first live performance. We think it’s the most accurate way to describe this wonderful adventure that musical director Paolo Silvestri recounts:

At first the project commissioned by I Art – Sicilia Jazz Festival and by the Orchestra Jazz del Mediterraneo was a revisitation of the most famous arias by Vincenzo Bellini. During the arrangement I gained the intention of creating a modern version of Norma, leaving the melodies almost unaltered in their extraordinary beauty, often keeping a shape that remembers the popular songs of our time, without respecting the original order but working in a jazzy way with the harmony and the instruments. The reference goes immediately to the Porgy and Bess by George Gershwin interpreted by Miles Davis and arranged by Gil Evans, and in particular to an orchestration with the “deep” sounds typical of the symphonic colours of classical music of the early 1900s and the tradition of American big bands.

In this case the soloist is a trumpet, that of Paolo Fresu, that sometimes works with the mute Harmon and the flugelhorn, taking care of the melodies and most of the improvised solos on harmonic structures elaborated by the original pieces.

So “Norma” here has been “rethought” according to the stylistic canon of jazz music thanks to the Orchestra Jazz del Mediterraneo and Paolo Fresu’s trumpet. Melodies have been left untouched but the creative goal has been to expand the colours of their own artistic expression. Considering how it turned out, this is an album not just for the curious and the omnivore.

The artwork image is a work by Alessandro Gottardo, an artist who has already collaborated with  Tǔk Music for the cover of the album Eros by Paolo Fresu and Omar Sosa which was released in 2016. Gottardo was born in Pordenone, has studied art in Venice and at Ied and is now living in Milan. His works has been published on important publications such as The New Yorker, El Pais, Die Zeit, The Guardian, Le Monde, Internazionale, The New York Times.