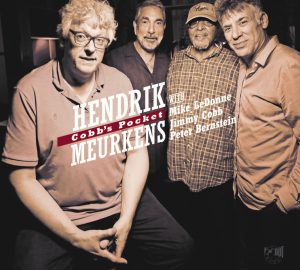 In his very productive career, Hendrik Meurkens has excelled on both harmonica and vibraphone in many different settings ranging from straight ahead jazz to Brazilian music. He has colla-borated with such notables as Herb Ellis, Mundell Lowe, Charlie Byrd, Ivan Lins, Monty Alexander, Claudio Roditi, Manfredo Fest, the Ray Brown Trio, Paquito D’Rivera, Oscar Castro-Neves and James Moody among many others. But one thing that was missing in his discography was a record with an organist, until now. The usual organ quartet is comprised of organ, tenor sax, guitar and drums. “I’m surprised that the combination of B3 Hammond organ, guitar and harmonica has rarely ever happened before,” says Hendrik. “The harmonica fits perfectly into the classic organ group and they are all bluesy instruments.” There have been re-latively few meetings between harmonica players and organists on record. The great Toots Thielemans only on rare occasions was heard with an organist (most notably a 1964 album with Dick Hyman) and the soulful harmonica player Buddy Lucas made some guest appearances on Jimmy Smith records. But, as one can hear throughout Cobb’s Pocket, having a harmonica in place of the tenor works quite well, at least if it is the right musician. Another notable aspect of Cobb’s Pocket is that Hendrik Meurkens teams up with drummer Jimmy Cobb for their third CD, following 1999’s New York Nights and 2016’s Harmonicus Rex. “I’ve known Jimmy Cobb for many years and we did a few European tours together. It is one of the thrills of my life that I can talk, hang and play with him. In addition to being a very sweet and cool guy, he was part of what I consider the #1 rhythm section
along with Paul Chambers, Wynton Kelly and Wes Montgomery. I always think that as long as Jimmy Cobb is around, it would be a crime not to call him!”

Hendrik Meurkens has also known guitarist Peter Bernstein and organist Mike LeDonne for a long time. He first used Bernstein back in 1994 on his Concord album Slidin’. “To me he is the perfect jazz guitarist, always swinging and tasty without being too notey; relaxed like Wes Montgomery with an emphasis on the melody. Mike LeDonne is the B3 guy in the city and he has a regular Tuesday night gig at Smoke. We did a few live dates at the old Cecil’s in New Jersey.”
Cobb’s Pocket came together quickly. Hendrik simply called the other players and in the recording studio, without any prior rehear-sal, they created their brand of musical magic. Such things are possible when complementary musicians on this level get together.
The music begins with “Driftin’”, a lesser-known but catchy Herbie Hancock song that serves as an excellent introduction to the group. The relaxed medium-tempo swinger has melodic harmonica, guitar and organ solos that lead logically to the closing melody statement. “Cobb’s Pocket”, the first of Hendrik’s three originals on the set, is a tribute to the drummer’s time feel and groove. The uptempo piece is followed by Slide Hampton’s sophisticated blues melody “Frame For The Blues” which is given a slow and dramatic treatment by the quartet.

One of Hendrik Meurkens’ best-known songs, “Slidin’”, has been recorded by the harmonica player at least six other times through the years including in settings featuring Peter Bernstein, Mundell Lowe, flugelhornist Rick Holland, tenor-saxophonist Eric Alexander, and Dave Chamberlain’s Band Of Bones. As is proven again in the latest version, the swinging “Slidin’” never fails to satisfy. Since Hendrik is well known for his many Brazilian albums, it is only right that he includes a bossa in this new setting. Henry Mancini’s “Slow Hot Wind” may not be the composer’s best known piece but its beautiful melody, original chord changes, and general warmth are vintage Mancini and it proves to be a perfect fit for Hendrik’s harmonica, LeDonne’s tasteful organ, Bernstein’s guitar and Cobb’s subtle drumming.

Bassist Sam Jones was a skilled composer. One of his most appealing songs was “Unit Seven” and, since Jimmy Cobb recorded a classic version in 1965 with Wes Montgomery, Wynton Kelly and Paul Chambers, Hendrik was enthusiastic about including it on this set. All four musicians have their opportunities to make swinging statements. The classic ballad “Polka Dots and Moonbeams” features some beautiful playing by Hendrik and a tasteful chorus split by Bernstein and LeDonne. Ending the enjoyable set in mellow fashion is Hendrik’s “A Slow One.”

After dabbling as a youth on several instruments, Hendrik Meurkens settled on the vibraphone when he was 16, adding the har-monica three years later. “I heard Toots Thielemans, said wow, and that was it. I was not so much a fan of the harmonica as I was a fan of Toots. He never disappointed me with his tone and beauty. The harmonica is a very difficult instrument. In jazz one wants to play legato but playing legato is the hardest part about playing harmonica, getting the swinging jazz phrasing.” One of the very few harmonica players who regularly plays straight ahead jazz (in addition to Brazilian music), Hendrik has followed in Toots Thielemans’ footsteps, developing his own voice on the instrument and emphasizing rich melodies in his composing. “I believe in classic mainstream jazz which is what I love the most,” summarizes Hendrik Meurkens. “Cobb’s Pocket fits into that style but what is unusual are my instrument and the instrumentation.” Not to mention the high quality of these four masterful musicians.
Scott Yanow, 2019