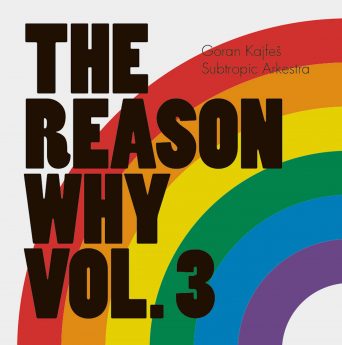 Albumtitel:  The Reason Why Vol. 3

The Reason Why Vol. 3

The Reason Why Vol. 3 is the Subtropic Arkestra’s third-and-final album in the trilogy – not because the vault of music that inspired and influenced this award-winning ensemble has been emptied but rather due to natural causes. “When we came up with idea of performing interpretations of the music that inspires us, we decided to limit the project to three volumes to avoid being pigeonholed as a covers band,” explains trumpeter and bandleader Goran Kajfeš. “It has been an incredibly rewarding experience for the group’s sound and development, but now it’s time to look forward and see what’s next for the Subtropic Arkestra.” In other words, the band will continue to exist but the music it performs will be created from within. “This is exciting because none of us knows what’s in there,” he says.

Now to this album, which contains music from Ethiopian keyboard player Hailu Mergia, French electronic music pioneer Bernard Fevre and even Panda Bear’s odd pop. “The Reason Why Vol. 3 is another album we are extremely proud of and one which we feel leaves the project on a high note. This time the band has been expanded further with horn blower Per “Texas” Johansson and the album was recorded at the Svenska Grammofon studio in Gothenburg and mixed in the Studio Rymden in Stockholm. I hope you enjoy it and will come to see us live on stage somewhere in the universe,” adds Goran.

The Reason Why Vol. 3 is available on CD and 180-gram coloured vinyl edition of 500 copies.

The Reason Why Vol. 1 sees Goran Kajfes’ Subtropic Arkestra reimagine such colourful music as the Turkish psych of Edip Akbayram, the soulful groove of Brazilian singer Arthur Verocai, the German psychedelic electronica of Cluster and the progressive jazz/rock of Soft Machine, Bo Hansson and Tame Impala, among others. The album earned glowing reviews from Bird is the Worm (US), HiFi + (UK), Jazzwise (UK), Songlines (UK), Shindig! (UK), Echoes (UK), Monocle (UK), The Independent (UK), Jazznytt (NO) and Ravno Do Dna (HR).

The Reason Why Vol. 2is a similarly diverse collection of songs, whose authors this time include American indie band Grizzly Bear, Cameroonian author and musician Francis Bebey, and Brazilian legend Milton Nascimento, among others. In addition, there a healthy dose of Turkish psychedelic and Balkan-inspired sounds and rhythms, which draw on Goran Kajfes’ family roots in the former Yugoslavia. The album received high praise from MOJO (UK), Jazz Journal (UK), UK Vibe (UK), The Wire (UK), Uncut Magazine (UK), Songlines (UK), Chicago Reader (US) and Jazznyt (DK).