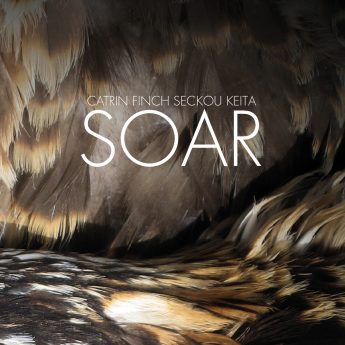 Welsh harpist Catrin Finch and Senegalese kora player Seckou Keita will release their much-anticipated second album SOARon 11thMay 2018 on the bendigedig label. The release will be followed by a Spring UK tour in April and May, supported on selected dates by singer-songwriter Gwyneth Glyn. Further festival and autumn dates are due to be announced shortly.

The new album takes flight on the wings of the osprey, the magnificent bird of prey recently returned to Wales after centuries of absence, which makes its annual 3,000-mile migration from the coasts of West Africa to the estuaries of Wales, soaring like music over man-made borders, an innate and epic journey of endurance.The release is the duo’s first since their award-winning debut album Clychau Dibonwhich released in 2013. They have been touring the world ever since. SOARexplores themes of migration, and journeys – both emotional and physical, and continues the duo’s intrepid exploration and celebration of the parallels and differences between their two instruments and cultures.

SOAR continues the avian theme started in Clychau Dibon, highlighting another amazing connection between Wales and Senegal that has recently re-established itself. The opening track Clarach is namedafter the first Dyfi osprey in modern times to be born in Wales who subsequently returned from West Africa as an adult to rear her own chicks in the UK. Back in the Middle Ages, Wales had a large osprey population, but by the early 17th century it was persecuted to extinction. Their ancient presence proves that migration between Senegal and Wales is nothing new. “I like the bird’s freedom to migrate to different places,” Seckou says. “They soar their way, and nothing stops them, but they know where they’re heading, where they’ll find peace and be happy. I’ve been on the same journey, but in a different way.”

Another track, Téranga Bah, touches on the importance of hospitality and welcoming strangers. Téranga means ‘hospitality’ in Wolof, and Bah means ‘great’ in Mandinka, both West African languages spoken by Seckou. So ‘Téranga Bah’ means ‘great hospitality’. “For Senegalese people, hospitality isn’t just about being nice,” Seckou says. “It’s a BIG ritual…You’ll find someone who doesn’t have a penny to live on, but when a stranger arrives, they’ll do anything to make them feel happy and welcome.” In the song, Seckou sings the words “open the gate, open the gate”. He’s urging the world to accept Senegalese hospitality and offer the same hospitality in return.

Yama Bais Catrin and Seckou’s reinterpretation of a track written by Seckou’s Uncle, Solo Cissokho in the 1990’s, in a mark of gratitude to a Fulani woman called Yama Ba who helped him to buy the equipment needed to amplify the kora. The heart of the piece is embodied in the melody played by Catrin, which was originally interpreted by bassist Kevin Willoughby who played with Solo back in the late 1990’s.

Other tracks featured include Bach to Baisso, the result of blending two highly revered pieces from two very different classical traditions. “That aria [an excerpt from Bach’s Goldberg Variations] is probably one of the most famous pieces of music out there,” says Catrin. “Bach himself was someone who was always experimenting. That’s the reason he’s respected in the way he is.” Bach on the kora? “I’m not sure it’s ever been done before,” adds Seckou. “The melody is fascinating, how the key changes go round and round, and I was curious because the kora is limited when it comes to playing those key changes. I needed to work on it, and I wanted to learn through Catrin.” Baisso is one of the oldest tune types in the Senegambian kora repertoire.

Themes of colonialization and enforced migration are explored in the track 1677, named after the year Vice-Admiral Jean II d’Estrées stormed the Dutch fort on the Island of Gorée off the coast of Senegal, and captured it in the name of his master, Louis XIV of France. The date marks the beginning of French rule in the region, and over the next century, Gorée was to become one of the most infamous slave trading emporia on the west coast of Africa. “[The piece] is kind of blues sounding, dancey, but also dark,” Seckou says. “That sound, going back and forth between us, made me think about the rocking boat, about the people who could only express themselves through music, even over the waves.”

“Listen to the Grass Growis a gentle little idea for a song that I wrote a couple of years ago,” Catrin says. “Just two or three chords. It was the idea of lying down in a field and listening to life. I think music does that. It’s very, very, gentle, very peaceful…a little interlude of stillness.”

Those who have seen the duo play live will recognise the electrifying piece Hinna Djulo. In Mandinka, hinna means ‘soul’ and djulo means ’strings’; ‘Soul Strings’. “It’s a prime example of a piece that we’ve been playing since the beginning,” Catrin says. “Over the last three or four years it’s morphed into this really brilliant song. Every time we kept playing it, we played it slightly differently. We’d add something, and it’s become such a charged piece now.”

Cofiwich Drywerynwas written by Catrin to commemorate one of the defining moments in Welsh political history. The words mean ‘remember Tryweryn’ and they’re daubed on a wall (now a protected national monument) next to the A487 between Cardigan and Aberystwyth. The graffiti laments the flooding of the Tryweryn valley in north Wales in 1965 to create the Llyn Celyn reservoir that supplied water to the city of Liverpool. The Welsh-speaking village of Capel Celyn was abandoned to the waters, its inhabitants forced to leave their homes. The anger felt in Wales lead to huge protests, acts of sabotage and a rise in support for Plaid Cymru and other Welsh nationalist groups. “I wrote this piece a long time ago,” Catrin says. “The Welsh language was disappearing fast. It wasn’t being taught in schools, and then this happened and fuelled everybody’s anger. It was an iconic moment.”

Drawing deep on their own diverse traditions and transforming them with remarkable synergy, Catrin and Seckou have built a formidable reputation for extraordinary performances over the past four years. Entrancing, mesmeric, intricate and ethereal, this critically acclaimed and multi award-winning collaboration between two adventurous virtuoso musicians delivers a stunning exhibition of world-class musicianship and a thrilling live experience.

The tour is produced by Theatr Mwldan mwldan.co.uk, and SOARwill release on the 11thMay on bendigedig, a label partnership between ARC Music Productions International Ltd and Theatr Mwldan – seebendigedig.org for further information.

“a sublime duo of two artists who are masters of their instruments…musicality and architecture at work”  Simon Broughton, London Evening Standard *****