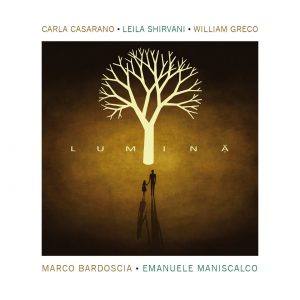 “Lumina is a tribute to Light”
“Its 10 tracks in which the word light is declined in ten different languages and in as many
original compositions. Because light is sound before being glance and colour.” – Paolo Fresu
Lumina was released on October 18th 2017, Thomas Edisons death anniversary, on Paolo
Fresus Tǔk Music label.
It was the trumpeter who conceived, directed and produced the whole project selecting
not only the musicians but all the other figures that contributed to its realization.
The quintet is formed by Carla Casarano on vocals, Leila Shirvani on cello, William Greco
on piano, Marco Bardoscia on double bass and Emanuele Maniscalco on drums and
harmonium.
The writers Lella Costa, Erri De Luca, Marcello Fois e Flavio Soriga have composed lyrics
expressely for this project and these are included in the booklet.
Marco Bardoscia has already been featured on Tǔk Music releases, first with Raffaele
Casarano and then as a key part with Quartetto Alborada and Rita Marcotulli of the BAM
collective that released the album Trigono in 2016.
Carla Casarano and William Greco make their welcome return to the label after recording
Argento by Raffaele Casarano.
Emanuele Maniscalco, one the very few Italian artists featured on the ECM label, makes
his debut on the Tǔk Label, and so does Leila Shirvani who, coming from the classical world,
successfully approached improvised music.
The ten tracks, five composed by Greco, three by Bardoscia and two by Maniscalco, soar
in a lyrical dimension suspended over a rarefied and evocative atmosphere, while an Emily
Dickinson poem, a Light Exists in Spring, and a lyric by Lella Costa, A Proposito di Luce,
both wonderfully sung by Carla Casarano, add a precious touch.
The project was previewed at the Locomotive Festival in Lecce on July 26th 2017 and will
be presented on tour in the forthcoming months.
Artwork was done by Toni Demuro, a designer who has worked with Vanity Fair, Carlo
Spera Editore, Eli Edizioni, La Peste and Il Manifesto, just to name his most recent
collaborations.
Lumina has been realized with the support of the Lamberto Fescobaldi winery, that produce
the extraordinary Luce della Vite wine, totally in tune with the musical and visionary
essence of this project.